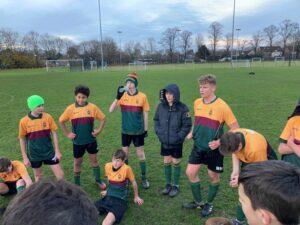 On Monday 29th November 2021, the Year 10B team cup game against Grey Court was a very tight match with both teams battling for the win to take them through to the next round.

The first half started off fast, we had some good opportunities but, unfortunately, the ball didn’t find its way into the back of the net.  Grey Court had a few opportunities too but they stood no chance of getting past our keeper, Alfie “The Hands” Holland.  We played on hard but with no reward of a goal in the first half; the team were playing well but we needed to make a few changes to stand a better chance in the second half.

The second half started well with Jimmy Winch earning a penalty.  Tension was in the air as his shot narrowly missed and hit the post.  It rebounded back, leaving an open goal for Flynn Duncan to run in and have a crack.  Unfortunately, the ground trips him up and he hits it wide.  So, the score is still Nil-Nil.  Grey Court play a couple of clever balls down the wing but the solid defending from Albert Nandan, Toby Baker and the Capitan Mani Hilton was an unstoppable back line.  The second half came to an end with no goals at all – we would have to go into extra time. 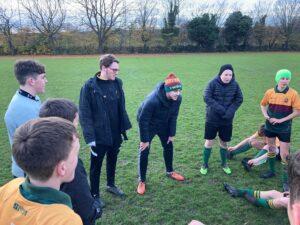 Morale remained high, the scene was set. Tristan Urquhart Irvine dribbled the ball out of a mess of players and took a shot from outside of the box. Everyone watched in pure amazement as the ball floated over the Grey Court keeper’s head and rippled the net.  Tristan’s hard work all game had paid off in the form of a beautiful goal to take the win 1-0.

Well done to all of the boys that played, the attitude was amazing and we look forward to playing in the next round.  Congratulations to the man of the match, Alfie “The Hands” Holland with some great saves and thankyou Mr Unsworth for all the coaching. We have a lot to learn from this game but overall it was a great win for the boys.