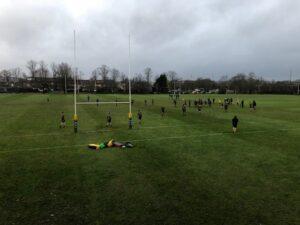 The much-awaited derby did not disappoint as the early exchanges were fierce and it was obvious that neither side were willing to concede territory or possession easily. The breakdown was particularly competitive as both sides were trying to retain the ball or jackyl it away from their opponents. The Windsor side decided to play with the elements in the first half and some excellent kicking from stand off, Tom Coomber put them in some great positions from which to pressurise the team in light blue.

Powerful inside centre Luke Austen managed to cross the line with an impressive solo effort. Coomber was narrowly unsuccessful with the conversion, the ball would hardly stay on the tee the wind was so strong! The College went into the break one try up, the score stood at 5 – 12. 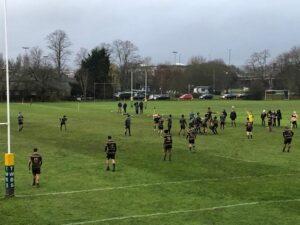 Despite all of Windsor Boys’ efforts in the second half the visitors gradually began to dominate the game scoring several unanswered tries. The wind picked up which made exiting their 22 particularly tough. The players forced the game and as a result made more errors. Eton then capitalised on these errors and ran away with the game.

For the Year 13 students this would be their last game in a Windsor Boys’ Shirt. As ever the whole squad gave their all and should be very proud of the effort they put in. The headteacher, Mr Furness, and Mr Fousset were impressed from the side line. Hopefully they can take their learnings into their club games and beyond.

Several of the players have achieved representative honours for the county. Details of this will be outlined in the end of season report.

Thank you to Mr Breen for organising all of the fixtures, referees, refereeing himself, the travel and to Mr Chester for coaching the side