On Wednesday 1st December, TWBS 1st XV took a long, warm, minibus ride along the M4 to Newbury for their county cup semi-final.

Playing into the breeze and with the sun in their eyes in the first half the boys started in a sloppy manner in attack. Clearly the journey along the motorway was a little too soporific and they were still half asleep! The lack of intensity in attack was evident as TWBS failed to get out of their own half for the first 20 minutes, conceding three converted tries in this time to a physical, but unsophisticated, opposition. Half-paced or confused carried with the ball when attacking were met by full force tackles and a referee with a penchant for blowing his whistle.

All this meant was that the stop-start nature of the game played into the St Bart’s strategy of set piece play and bullying carries by the pack around the rucks in attack. Losing lineout jumper Morgan Hooker Leo and Captain Fynn to injuries disrupted the set piece somewhat.

Yet once TWBS gained some possession and went through the phases they looked the better team and were given a lifeline on the cusp of half-time when Luke Austen rumbled over from close range; the lightbulb came on and it showed that by running hard and fast with the ball meant we would go forwards! The tricky conversion fell short, so the teams changed ends at 21-5, with the next score being vital to the outcome of the game. 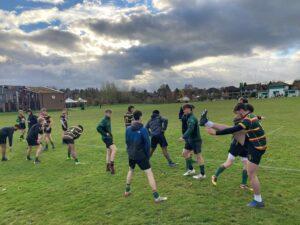 TWBS had much to be praised in their play in the second half – the defence was firm and organised and when attacks lasted more than three phases, we looked likely to score. However, with a scrum that was starting to yield ground and a lineout that never gave clean possession, any infractions by our hosts were unpunished. The backline were never fluent and often conceded ground through unimaginative, incohesive play. After several more tactical changes were made, considered and unrelenting pressure in attack saw Dawud and Omari both score, with just one try conceded.   With a quarter of the match to play TWBS now trailed 26-17 and had belief. A further (converted) try then saw TWBS set up a grandstand finish at 24-26 with three minutes to play. Alas, a handling error around the halfway line gave St Bart’s possession that they ably kept and the game finished with a converted try to end 33-24 to St Bart’s – worthy winners on the day.

Halliford at home on Saturday and Eton away on Tuesday will hopefully give more reasons to cheer as the season winds to a close.