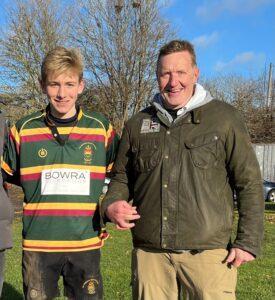 The final Saturday of the season had the 1st XV hosting Halliford School on fortress Stovell – TWBS seeking to make amends for an insipid performance and 29-3 defeat to them in the league earlier in the season.

We were honoured to welcome Mark Bowra (link to his inspiring story is her – https://www.bowra-foundation.org/) to the game (pictured alongside 1st XV Fly Half, Tom Coomber) – it is his foundation that is our main shirt sponsor this season and the link to the work of his foundation can be found here  – https://www.collectionpot.com/pot/team-bowra/

A senior side sprinkled with U16, U17 and U18 talent started the game with an intent and discipline that was absent during much of the season.  This was a physical encounter from the start, but with clear skies and only a breath of wind the conditions allowed flowing rugby to be played as well.  A see-saw first quarter of an hour led to Halliford eventually breaching the Windsor defence to cross for a try. This was certainly an even contest and Year 11 debutants Harry, Brodie, James acquitted themselves with pride and no little skill.  As ever, TWBS fought hard from 5-0 down and, with a combination of the thoughtful and well executed kicking game from Tom Coomber at fly half and endeavour and patience when attacking, after a succession of phases the ball made its way to Josh Ratcliffe on the wing; he had the pace, power and balance to score in the corner and level the game at 5-5.  This was clearly a different game to the previous meeting as TWBS were full of bite and skill in attack as well as grit and determination in defence.  A converted try on the stroke of half time gave Halliford a 12-5 lead, which they deserved at this point in the match having played into the wind in the opening half with control and poise.

The second half was played in much the same pattern as the first – each team was resolute in defence and patient in attack.  TWBS were now living off scraps at set piece with a creaking scrum and predictable lineout; and captain Fynn left watching from the sidelines – his fragile shoulders again his Achilles’ heel. Luke Jones at fullback was excellent at diffusing any high bombs put up by the Halliford fly half, Luke Austen & Leo in the centres gave good gainline control in attack by carrying the ball hard and direct; Ben Lawson led the forward pack around the park with strong ball carrying and destructive fringe defence.  Both teams hammered on opposition try lines without success.  Incredibly the second half was scoreless, resulting in a 12-5 loss for TWBS.  However, a faultless performance in terms of effort, skill and determination kept them in the match right up to the final whistle.  There was certainly no shame in losing to a better side on the day. Determination, never-say-die attitude and huge heart; TWBS 1st XV truly played in a manner to impress Mark Bowra!