On Saturday the 1st team travelled to Isleworth & Syon School.

Sadly just 13 souls made it onto the minibuses with Mr Breen and Mr Woods. Thankfully, our hosts were understanding and we played a 13-a-side game.

A still rusty TWBS side were a little disjointed in attack, but their core passing, catching and rucking skills were good so that possession was kept for long periods. For much of the first half all the rugby was played by TWBS inside the Isleworth & Syon 22m, but all we had to show from it at half time were two penalties from FlyHalf Tom Coomber.

This was frustrating as the solitary Isleworth attack in the TWBS 22 resulted in a converted try just before half time, meaning all the pressure and possession retained still left us trailing 7-6 at the half. An early Coomber penalty after the restart gave Windsor the lead again 9-7 and the story of the second half was very similar to the first.

Windsor had most of the territory and possession, but could not find a way over the try line. Half a dozen clear line breaks could  and probably should have seen more points on the board, but panicked and frantic offloads and passing meant these chances were squandered.

With under ten minutes to play, a clean lineout win around the halfway line was carried into the midfield by Dom McLeod Smith , who soon found himself in acres of space as he ran through the defensive line untouched! He just about managed to maintain his speed to cross the tryline between the posts for a simple conversion by Coomber. 16-7 was the final score, but TWBS will reflect on a game that they dominated in possession and territory but that they could have easily lost by individual error. They must be more clinical with the ball to ensure that many more scoring opportunities are taken.

Fixtures against Latymer Upper School, LVS (Ascot) & Sir William Borlase (NatWest Vase round 2) in the coming week will all be sterner tests, and will need calmer and cooler heads to prevail. 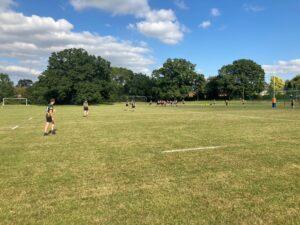