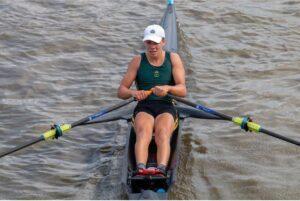 The Scullers Head is a huge event held up in London on the Championship Rowing course from Chiswick Bridge to Putney, stretching a demanding 7km long, the reverse of the normal Boat Race Course. The event attracts nearly 500 scullers from across the country and beyond, including Olympic and World Champions.

The entry from TWBS this year was the biggest ever with seventeen boys entered, and four Windsorians.

Racing was as tough as ever with a stiff head wind confronting the athletes especially as they came through Hammersmith Bridge with 2000m still to run. With the stream running and the wind hitting it straight on, this made condition tricky and very tough.

The boys raced very well though. The headline performance was from Marcus Chute, currently ranked number one in the country for U19 level. He won the Junior event outright and came an extremely impressive eighth overall from the whole field, with only a handful of U23 and senior rowers ahead of him. A serious talent in the sport Marcus has a very bight future, and it was nice for him to show this so early in the season.

Charlie Warren, also an impressive talent, came home in second place in the juniors and with a top 20 position. Our lead J16 (yr 11) was Jimmy Harlow who raced well to a third place in that category, and beyond that it was really great to see so many solid performance from the scullers, flying the flag high for The Windsor Boys’ School.