The Boat Club travelled to Peterborough from Friday to Sunday last weekend for the Peterborough Junior Regatta. Held on an intimate 1000m course which is four race lanes wide, it is the perfect venue for the J14 and J15 squads. Fully Covid compliant, sadly despite all efforts made, no spectators continue not to be allowed at rowing events.

After travelling with all the equipment on Friday afternoon, a logistical feat, racing got underway on Saturday with the J14 Squad (year 9). This was the first regatta outside of Dorney, so additional learning with trailer duties, and learning to de-rig load and re-rig boats sees them progressing with their learning for the whole sport. Trailer and boat duties are mandatory, and the need to learn to be efficient and get it right – even one part of the boats missing can render the boat unusable and prevent a crew from racing.

The morning rounds of racing saw the Octuple of Elliot, Wellington, Taylor, Fiddy, Paice, Gillies, Larose, Richards J, & cox Gardner out racing, as well as Josh Barnes, Marcus Downie, and Harry Leeson out racing for the first time in singles – getting J14s ready to race in singles is a tall order, however we have been making quite a push on developing single sculling skills, so it was great to see these three out racing and performing so well. 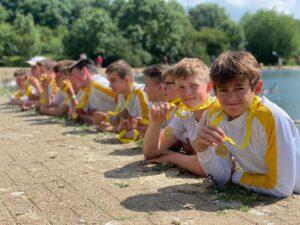 After the initial rounds, the octuple made the ‘A’ final and went on to win the event and take the GOLD medal. Some fantastic racing and great to see a crew which was a blend of different crews from previous weeks gel so quickly – a cohesive squad with clear technical modelling should ensure any squad member can row with anyone at any time in any boat and any seat.

Meanwhile in the singles, Harry Leeson made the ‘B’ final which he won – developing well, Harry has become more and more confident in the single.

Marcus Downie and Josh Barnes both made the ‘A’ final, which was outstanding, and even better was to see them both come home with a medal, with Marcus taking the Bronze medal and Josh the GOLD. A fantastic outcome, and great to see. Josh also was awarded the ‘Best Watermanship’ trophy for the whole of the regatta – well done to him!

In the afternoon, quads and doubles raced. Again the J14 squad showed the strong potential they have for the sport, with Jake Longstaff and Will Finnis, both with much growing ahead of them, showing they are real racers by winning the ‘B’ final. In the quads event, WBS entered three boats. The crew of Owen Stanford, Leo Jones, Fillip Vasil, Samuel Richards & Olly Stanford coxing, raced really well to 1st place in the B final while the crews of  Gabriel McIntyre, Tristan Urquart-Irvine, Joe Wellington, Oscar Whelan & Zach Gardner coxing, and Adam Elliot, Harry Leeson, Marcus Downie, Josh Barnes & Peter Jansen Spence coxing both made the ‘A’ final, with the latter taking the GOLD medal, and the former taking the SILVER medal!

Just an outstanding set of results, and I am very pleased and proud to see this group so engaged with the sport and all the process learning involved – it is a challenge! The future is exciting.

Sunday saw the turn of the J15 squad racing. Sadly, the octuple event was withdrawn from the event after all the competitors withdrew for the event. Nonetheless some great racing was evidenced in the quads, doubles and singles events. 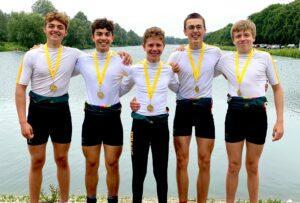 The quad of Sanad Al Qahef, Atticus Chute, Pedro Theriaga, Jimmy Harlow, and cox Josh Claassen continue to show how far they have come by dominating ‘A’ final and taking GOLD. In the doubles, the crew of Jakob Truter and Olli Griffiths took the GOLD medal and Antonio Todorov and Toby Ayres the SILVER medal. This was the first medals achieved by these four, and it was great to see after such a long introduction to the sport. Again, testament to sticking with it and keeping going no matter what.

In the singles event, Sanad Al Qahef and Atticus Chute made the B final showing their ongoing development in this class, while Pedro Theriaga and Jimmy Harlow made the ‘A’ final. In the final, Pedro led for most of the way into the tough head wind conditions, but sadly could not quite hang on but eventually took the BRONZE medal – a hard fought race of margins.

Overall an epic weekend of planning and execution. The boys were excellent, as were the patient parents who made a big effort but were able to see very little. Well done to all the boys and excellent coaches team for an ‘extensive’ weekend, topped off by WBSBC winning the Victor Ledorum Shield for combined results across the weekend!