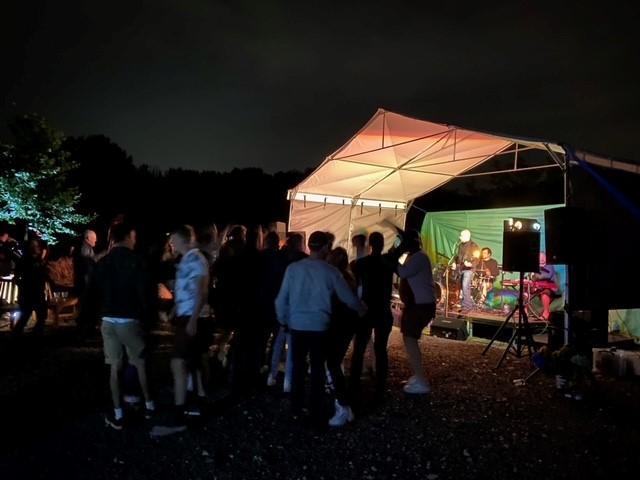 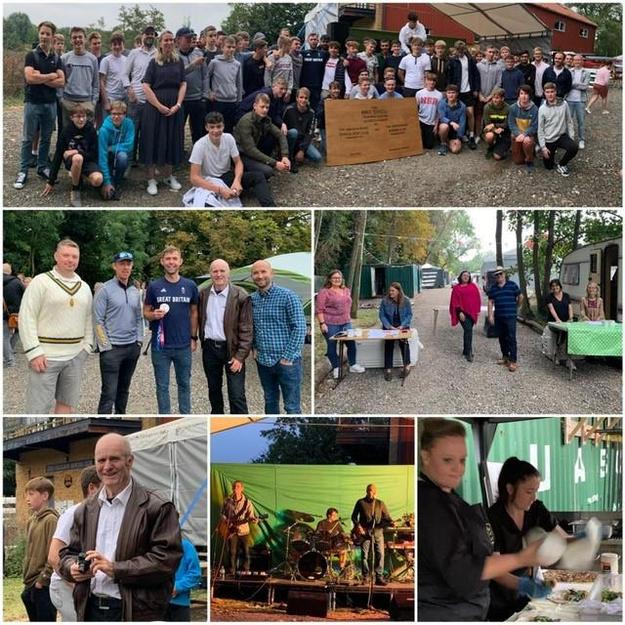 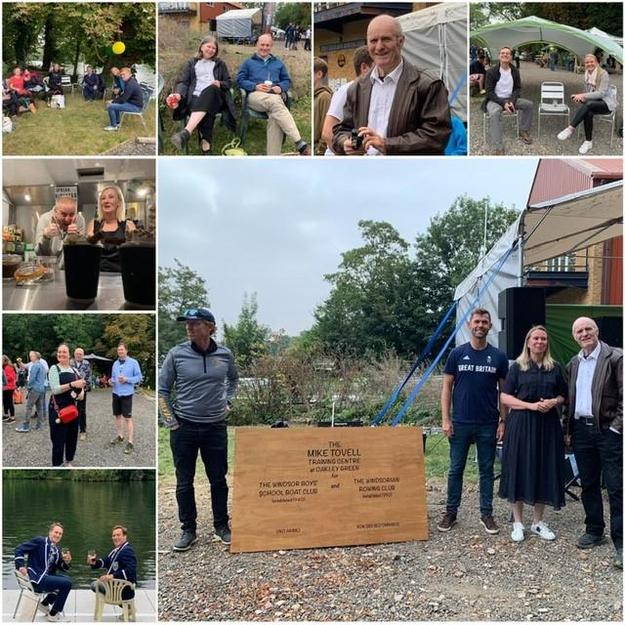 The New Boat Club Training Centre, named the Mike Tovell Training Centre (MTTC), in memory of a former captain of Boats, who sadly passed away in 2020, is now officially open.

The MTTC has been built almost entirely by hand – indeed the first day on site we had to chain saw our way in! After many months of hard work, initially just with the coaches but then eventually with boys and parents who were able to assist as lockdowns ended, the site is now a full functioning, albeit with temporary structures, rowing centre.

The officially opening saw nearly three hundred people attend including Jack Beaumont, SILVER medal winner in Tokyo Olympics, as part of the Means Quad. It was great to have him there to help officially open the site.

Chris Morrell who knew Mike Tovell perhaps the best from Mike’s time at school, spoke movingly of Mike, and with Mike’s sister in attendance the moment was a fitting tribute to Mike, and he would have been deeply honoured to have the facility named in his honour.

With a live band and plenty of great food it was a festival atmosphere, and after all the issues of the past year, just brilliant to have everyone together again!!

Chris Morrells Full speech can be read here:
“As a teacher you come across many young people during the course of your working life – a few you remember, many fade into obscurity. Mike Tovell was one of those clearly remembered, even thirty –five years later! Sadly too often you lose contact with them when they leave the school and you know little of what they subsequently achieved. He joined WBS as a relatively diminutive 13 year old, a youngster who could quite easily have been overlooked. Mike’s personality was such that this could not be the case. He was bubbly, very intelligent and very determined, impossible to ignore. He had that often elusive, indefinable quality that Mark values most in his athletes – that of Attitude. A symbol of the impact he made on the lives of so many people is the impressive memorial booklet produced by his many friends and colleagues – in it he is described as a “force of nature” and “a man for all seasons.” So true! Apparently when he was at Trevelyan Middle School one of his teachers forecast that he would either go to Oxbridge – or go to prison! Fortunately for us the former. Mike took to rowing like the proverbial duck, a natural athlete. I often find that the boys who make good strokes are those who want to take on that responsibility – he was definitely one of those. He had natural leadership skills exemplified later in life by his successful career as Major in the Parachute Regiment. He made the stroke seat his own and thrived in that position. Whilst rowing became his major sport he was a natural sportsman and played many other games – rugby and hockey amongst others.  !n 1985 I was persuaded by a group of year 9 boys to help them raise some money for Children in Need, hosted at the time by the legendary Terry Wogan. Mike was one of these. A 24-hour sponsored basketball was the medium. Typically, with the enthusiasm of thirteen year olds, they set off flat out – this slowly reduced as the hours passed to a walking pace. The long dark hours of the night were enlivened when the police arrived having been alerted by a neighbour concerned that there was unusual activity going on in the school gym. Satisfied that all was well they departed – having left a sizeable donation to the fund! Mike’s school academic career was very successful”.

His career at Downing College Cambridge was marked by a switch from Natural Sciences to Law – conspiracy theory had it that making this change gave him more time to row! He gained two half blues as stroke of the Cambridge Uni. Lightweight eight at the Henley Races and successfully stroked his college eight.
He had a stellar career in the Paras – with postings to N Ireland, the Balkans and Sierra Leone.
A promising business career loomed and he continued his involvement with rowing at Upper Thames RC  – coincidentally our social hosts at Henley this year.

I hope his family – and welcome to Susan, his sister – and friends feel that this centre is a fitting tribute to the memory of the man, one that he would be proud to have his name associated with. Whilst it is still in the developmental stage I am sure that you can see its potential as an outstanding facility for future generations of rowers.
Thank you.”

Peter Rawling, former Deputy Head, quoted:
“Living in a house that literally backed on to The Windsor Boys’ School playing fields, Mike was brought up looking out on to the secondary school that he aspired to join. When he did so aged 13 in September 1985, he took full advantage of all that we had to offer and played the fullest part in the life of both the school and the local community. Becoming Head Boy and Captain of Boats, he represented the school at almost every sport and even took up half marathon running to raise funds for local charities. Competitive, but always in a cheerful and positive fashion, he played a leading role in his year group and he was the overwhelming choice of his peers, as well as of the staff, to captain the school in his final year. He set a fine example and even then showed all the qualities that were to lead him to success in later life – at college, in the Army and in business. Academically he was just as strong – a set of top grades at GCSE was followed by a full set of A grades at A-level in the three sciences taking him to Downing College, Cambridge to read Natural Sciences. We have a motto that “once a Windsor Boy, always a Windsor Boy”. Mike reflected that in the contacts he maintained with the school, even joining younger rowers for training sessions as recently as last year. We shall always value his memory and be proud of the part we played in his history and of the contribution he made to ours”.