A few Sixth form students attended an online law webinar hosted by Professor Antonia Layard, University of Oxford. She discussed why students may want to pursue a career in Law on top of the qualifications and skills needed to do well. During the talk she applied her favourite type of Law - Land Law, to a real-life scenario – The dragging down of the statue of Edward Colston.  Professor Layard analysed all the points of law that should be considered. For example, the potential defences available, one of which was that the statue had not been damaged as it was made valuable by being placed in a museum.  All in all, the webinar was deemed very useful by the students as the Professor answered many questions and provided us with lots of knowledge about future careers in law. Giacomo Beatty, Year 12

I attended the Careers in Engineering webinar that was hosted on zoom.   There were a wide range of people speaking who had been pursuing their passion from various routes such as, some are doing an apprenticeship, some are in university, and some even went straight into working. However, the main focus of the webinar was no matter what A-levels you take from further maths or Art, you 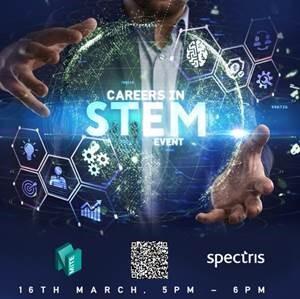 can still end up in the same industry that you love and have a passion for. The speaker that really caught my eye was Peter Metcalfe as he works at NMITE which is a mix between apprenticeships and university in the sense that you can get a university degree while getting paid and you really get a feel for how things work in the real world where you might have to work a 9-5. This webinar really helped me in making further decisions with my future and answered all our question with ease and helped me gain insightful knowledge in how engineering is like in the future.

On arrival we were greeted by the CEO of MCFT (an engineering business that focussed on kitchen appliances, who worked closely with top businesses) Chris Craggs, he introduced himself before launching himself into an in-depth explanation of what were we aiming to learn on our day out, whilst also providing some insight on what the business stood for.  We were given a tour of the premises by some of the senior managers and were given the opportunity to see the day-to-day jobs of the staff in sales, IT support and recruitment - asking questions as we went through each area of the business.

The managers then explained the ethos and aims of the business as well as how they planned to grow further.  This was a highly interesting section of the day as it isn't often you have some managers revealing all the top secrets of the business! After this, we were provided with lunch and a project to do for the rest of the day (my highlight of the day!) where we were given a list of countries: France, US, Japan, South Africa, and Australia, and were tasked with determining the best place to grow the business and for what reasons. We would have to use teamwork and knowledge gained about the business through the tours and talks to argue which countries would be the best place to grow in and why. All the students were split up into 4 groups predetermined by the business to encourage us to use our teamworking skills to work with people we had not previously known. My group came up with France being the best option, but this was disputed by the other groups who tried to find holes in each other's ideas when ideas were pitched making the whole project highly competitive and in the words of Chris "Exactly what you would see in a real meeting". At the end of all the pitches the winner was declared to be the group with our very own Luke Dunkley with their strong arguments for the US.

It was also good to have the support and contribution from two TWBS Alumni who have been through the MCFT Apprenticeship Programme. As the day concluded we received a message displaying the business's thanks from Chris and the other managers for participating so passionately in their project and we were sent on our way in the pouring rain, arguably the only negative of the day! In summary the day out was great for learning more about a business run's and plans to grow in the face of any attrition, but also provided a great insight on what it is like to work in the environment of business engineering and on behalf of everyone we would like to display our thanks for the business running such a successful day which gave us an experience we would never have been able to get without them setting up this incredible event! Daniel Drake, Year 12 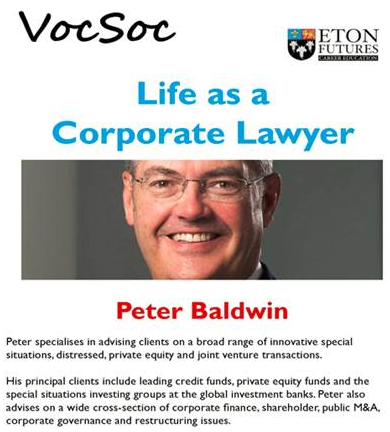 I attended the talk by Peter Baldwin who spoke about his career as a corporate lawyer. He discussed the characteristics of a good lawyer, someone who is hard working, tactical and persuasive and how he deals with a number of international clients. I found it very interesting and it was definitely worth the trip over to Eton.  Will Gillies, Year 12

The physics talk was very 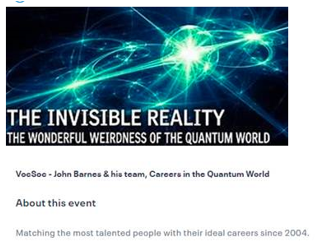 interesting.  Instead of going into the details of different aspects of quantum mechanics as I expected, the panellists talked about what the future of the industry would be like and how research around the world is connected as well as the opportunities in this industry. The most interesting talk of the evening though was the final panellist as he talked about the benefits of quantum technology as well as how to improve your skills with things like Quantum Machine Learning and how to build an interest in similar topics.  Overall, it was interesting talk that we were lucky to attend. We got to meet some of the best researchers and teams in the field of quantum computing.  It was highly informative and showed us some of the different pathways into quantum careers.    Yuvraj Kharay / Timur Filyk, Year 12

I attended a financial services, trading and investment talk with Maven.  Although I was a little hesitant at first, I decided to attend the course and see what it was like. I joined the call early and was greeted by one of the current employees at Maven. She briefly explained what Maven was and what she does on a day-to-day basis. This helped me get a better understanding of the company and grabbed my interests. Once she had finished introducing the company, she handed over to her colleague which went through how employees at Maven use excel and the benefits to the company. Throughout the talk we were allowed to ask any questions we had about the business which cleared up any uncertainty we had.  Overall, I think that this webinar was very useful not only for getting a feel of what working at Maven was like but also for helping to provided me with a better understanding of what a career in financial services and trading would look like. 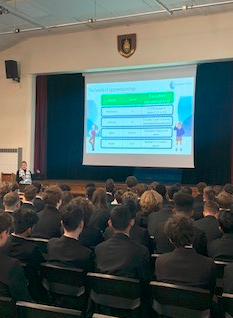 Last Friday saw the third Post-16 Pathways assembly of the academic year. The Year 11 students were greeted by an affable speaker from the Education and Skills Funding Agency- an executive agency of the UK Government. The engaging presentation commenced with an introduction to apprenticeships, and the different levels available to be undertaken by students. Higher and degree apprenticeships were also considered; certainly, this gained the interest of many students who were intending to take a 6th form-university pathway (such as myself). The assembly concluded with a brief Q&A, and some boys stayed behind to explore the apprenticeship pathway further. Overall, a very useful and informative assembly!

We have many more events lined up for May so keep a look out for emails.  The Employer events are usually aimed at Years 12/13, some are open to Y11 and occasionally Y10.  All year groups have access to Unifrog webinars, and their events are generally for all year groups (and they have the watch on demand facility).

Can I please remind you to only book onto an event if you are able to attend as some of the opportunities have limited places available.

Have a good break.